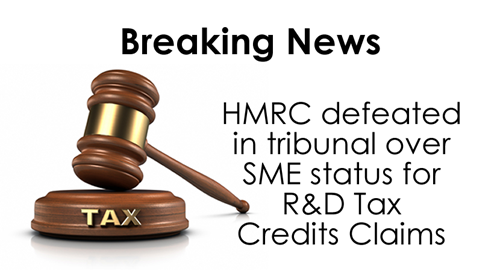 In the recent case of Pyreos Ltd Vs HMRC, the taxpayer has successfully appealed HMRC’s decision, which disallowed the company from claiming R&D tax credits under the SME Scheme. The tribunal it agreed that the parent company was deemed to be a Specified Investment Enterprise and not a Large Company.

HMRC’s original decision, was that due to Large Company shareholdings (2010 = 49%, 2012 = 36%) by Siemens Technology Accelerator the investment arm of Siemens in Pyreos Ltd, their R&D tax credits claims must be made under the Large Company Scheme and not the SME Scheme.

For R&D purposes, a SME is defined as a company or organisation with fewer than 500 employees and either an annual turnover not exceeding €100 million or a balance sheet not exceeding €86 million. Any company or organisation that has a shareholding of 25% in your company must be considered within these limits, and therefore, your company may not be considered to be an SME if the limits, taken as a whole are exceeded.

Although these shareholding limits were exceeded by Siemens Technology Accelerator, an exemption exists to allow Specified Investment Enterprises such as Venture Capital Companies (VCC) to acquire up to 50% of an SME, without SME status being affected.

Additionally, although Pyreos Ltd had entered into a partnership agreement, as Siemens Technology Accelerator didn’t hold a controlling shareholding and was not involved in Pyreos Ltd’s executive management, they did not fall within the definition of a Linked Enterprise, and could therefore, claim R&D Tax Relief as an autonomous SME.

Implications of the Tribunal’s decision on R&D tax credits

There are significant advantages to companies claiming R&D tax credits through the SME Scheme, rather than the Large Company and RDEC Schemes (introduced on 1st April 2013), and therefore, it is important to structure your company to ensure that R&D Tax Relief is optimised.

At the time of Pyreos Ltd’s R&D tax credits claims, the tax relief on allowable R&D costs under the Large Company Scheme was, and remains 130%. This means that for each £100 of qualifying R&D expenditure, a company could have the income on which Corporation Tax is paid reduced by an additional £30, on top of the £100 spent.

There have been a number of changes to the SME Scheme for R&D Tax Relief since Pyreos Ltd’s claims in 2010, with the tax relief allowable on R&D costs increasing from 175% to 200% and then to 225%. Since 1st April 2015, this rate has increased to 230%, meaning companies can now reduce the income on which Corporation Tax is paid to be reduced by an additional £130 for every £100 of R&D expenditure.

Both the SME Scheme and Large Company Schemes for R&D tax credits allow for enhanced relief to be applied for qualifying R&D expenditure, however, at the time of Pyreos Ltd’s claims and prior to the introduction of RDEC, the Large Company Scheme only enabled companies to enhance their expenditure, whereas the SME Scheme allowed loss-making companies to receive a payable R&D tax credit.

Venture Capital Partnerships have become increasingly popular in the UK over recent years and the case of Pyreos Ltd Vs HMRC highlights the importance of developing an effective R&D infrastructure and strategy. Laws and regulations exist to prevent large companies from obtaining SME relief on projects that are or will become part of the group, however, in the example of Pyreos Ltd, they were considered by the tribunal an autonomous company engaged in extensive R&D.

How Myriad can help

As R&D tax credits specialists, Myriad Associates can assist you in identifying the optimal R&D tax strategy to ensure that your R&D Tax Relief is maximised whilst your company structure conforms to the complex tax legislation and laws.

In the case of Pyreos Ltd Vs HMRC, the tribunal’s decision ultimately focussed on whether Siemens Technology Accelerator should be considered a Specified Investment Enterprise or a Linked Enterprise. There are, however, a number of factors that influence a company’s ability to claim R&D Tax Relief under all schemes, and therefore, professional advice should be sought to ensure the correct strategy for your company is implemented.