Virtual reality and Augmented reality: opportunities at the cutting edge of technology

There has been a lot of media attention recently around augmented reality (AR) and virtual reality (VR). Investors have been eager to get in on the ground floor of the next AR or VR venture, as the futuristic nature of the technology involved in both areas is very appealing. Consumers are seeing a growing array of applications and products, designed to reshape the way we watch, touch, and feel media. Some people, however, are unaware of the differences between VR and AR, and it is important to understand those differences if you are an entrepreneur or business owner thinking of making an investment.

What is Virtual Reality? 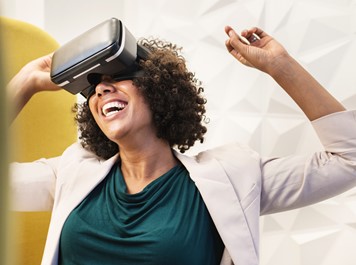 Virtual reality (VR) is an artificial, computer-generated simulation or regeneration of a location or situation. VR users wear a specially designed headset with built-in display and headphones, which creates an immersive experience, making the users feel like they are experiencing simulated reality. Some VR systems also make use of gloves or handheld devices which track the hand and arm movements. Leading VR equipment providers include Oculus (now owned by Facebook) which produces the Oculus Rift headset, and Samsung, whose Gear headset also uses Oculus technology.

At the moment, VR is often used for computer gaming, giving players the experience of being inside the landscape of the game. VR also has more serious uses, as it can also be used to enhance training for environments, such as flight simulators for trainee pilots. Virtual reality environments are created using a coding language known as VRML (Virtual Reality Modeling Language) which is used to create the visual images the user sees, and to specify what types of interactions are possible.

What is Augmented Reality? Augmented reality (AR) is a technology that adds a layer computer-generated enhancements on top of a real live scene. This gives users additional information and options for digital interaction. AR apps are used on mobile devices to blend digital mechanisms into the real world to enhance reality rather than replace it.

AR technology is quickly coming into the mainstream. It is used to display score overlays on telecasted sports games and to pop out 3D emails, photos or text messages on mobile devices. Leading developers of AR have demonstrated uses with holograms and motion activated instructions.

What are the opportunities?

Not that long ago, the opportunities offered by both augmented reality and virtual reality would have been dismissed as science fiction fantasies. But technology has caught up and even overtaken, many of those dreams, and we are right to expect even greater advances in AR and VR in the coming years. That’s why so many investors are lining up to back innovative technology companies working in these fields.

Government funding is also available for AR and VR research and development. Innovate , the UK’s innovation agency has just launched round 2 of the Emerging and Enabling Technologies programme. This £15m grant-funding pot aims to inspire the products, processes, and services of tomorrow, these technologies include augmented and virtual reality. Competitions such as these are designed to stimulate companies with innovative digital ideas in this field, not just for entertainment or information sharing, but also for more technical and industrial contexts. This level of government support is evidence that AR and VR have a massive part to play in the advancement of the British technology sector.